You may be familiar with a 'growth mindset' in preference to a fixed one. It's a belief that knowledge and skills can be developed over time rather than being innate and fixed. This way of thinking allows us to be open to new ideas and possibilities. In this respect, a research mindset is similar, as what you achieve is directly impacted by how you think.

What do we mean by a research mindset?

A research mindset is about how design is approached, managed and carried out. It’s governed by principles rather than a model or process.

It’s not a framework, it’s a way of thinking.

A core belief is that if you don’t have a genuine, in-depth understanding of all the elements on which your product/service depend, then you won’t make something useful.

In the absence of design research, the problem of forcing a product/market fit can arise. This is often portrayed as something that can be determined via ‘gut feel’ and instinct, rather than any clear set of circumstances.

A CEO, Product Manager or Designer with a research mindset will always be:

This leads to the clearest possible understanding of the whole picture in which you’re operating.

What are the benefits of a research mindset?

Research is an integral part of the design and development process. If a decision needs to be made, evidence gathered from research is seen as a non-negotiable.

1. Research is recognised as a powerful decision-making tool

Design decision-making is a controlled and carefully considered process. Important changes, that could affect the user, are never knee-jerk or reactive. Decisions aren’t made by a HIPPO (highest paid person's opinion) or by committee; they are led by evidence and balancing user needs with business goals.

2. Insights and information are prioritised over instinct

Key design decisions and changes are not made until there is evidence to support them. It is a central part of every design process.

3. Ideas are evaluated through evidence

A roadmap, backlog and client requests become easier to prioritise when ideas are assessed by the evidence/data available to support them. For example, social sharing buttons may seem like a great idea to make your website content more shareable but people rarely use them.

Designers, researchers, developers, product managers and other project members collaborate on equal terms and a shared understanding. The team are also on the constant lookout for assumptions.

5. Projects have a clear, well-defined goal, with measurable outcomes

These goals are iterated based on ongoing findings and outcomes, most successfully through an Agile approach to product management.

Examples of the research mindset in action

What: In 2003, LEGO was on the verge of bankruptcy when a new CEO - Jorgen Vig Knudstorp - championed a research-based approach to the business.

How: For the first time ever, the team observed children, spoke to adult fans and explored in-depth the whole toy market and LEGO’s place within it. Based on their findings, they realised that their previous approach had been based on huge, incorrect assumptions.

This led LEGO to develop a policy of ‘constant empathetic contact with customers’ and no new products were launched without research with the end-user (or player, in this case).

Result: After adopting this research mindset, LEGO’s 2005 City edition of construction and police sets more than tripled the line’s revenue. Obviously, LEGO has gone on to become one of the most powerful brands in the world, not just in the toy market. They continue to use research as an integral part of their strategy, not only to test ideas but to uncover new ones.

What: The Government Digital Service (GDS) was founded in 2010 and tasked with digitising government services.

How: The team brought a research mindset to government departments and were able to influence and shape their approach to design, development and content. They established and lived by the GDS Design Principles, which include ‘Design with data’ and ‘Start with user needs’. 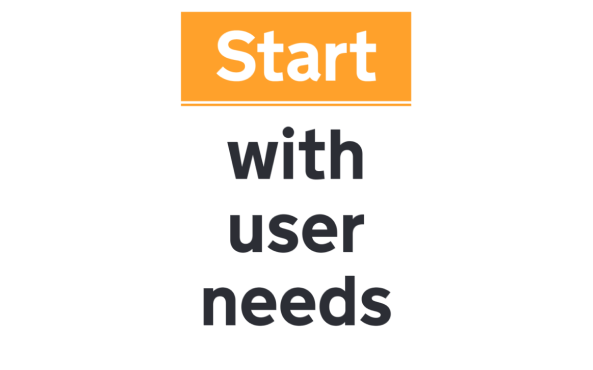 Starting with user needs allows you to understand the context that you’re designing for. It’s easy to fall into the trap of designing for devices and not for people.

For example, designing a digital service to be used in a library by a cross-section of the public has a very different context to designing an app for developers.

Go to GDS for more posters

If you have any thoughts or questions, we'd love to hear from you - get in touch.

Thanks for signing up to our quarterly newsletter. We’ll be in touch soon.

In the meantime, if you’d like to discuss a project,
get in touch.